Posted on May 12, 2014 by Metropolitan Wholesale

The Following Article Appeared In The Wall Street Journal on Saturday 5/10/14:

Picking Among Low-End Flowers in Advance of Mother’s Day

Metro Money: Anne Kadet Says Some New Yorkers Will Be Tempted by the Bodega Bouquet 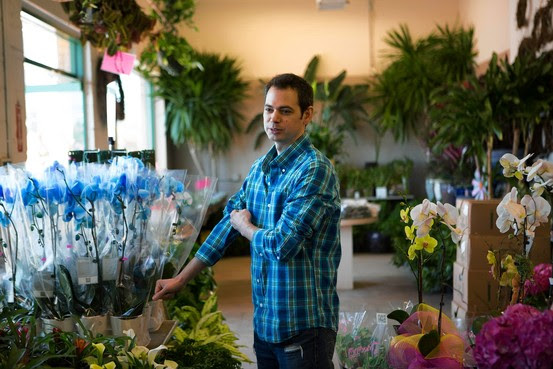 It’s Mother’s Day weekend, and all the good boys and girls will be buying fancy arrangements of roses, peonies and tulips from the city’s fancy florists. You can spend hundreds of dollars, if you like, on pink hyacinths. But more than a few New Yorkers will be tempted by a cheaper alternative—the bodega bouquet.

Yes, nothing says “I’m busy but I love you” like a $12 bunch of roses from the green grocer’s sidewalk stand. It’s the floral equivalent of cake from a mix. And does mom even have to know? Not if you’re clever with your flower choices. But more on that later.

The more interesting question, for those of us who rely on the easy availability of these cheap bouquets for dinner parties, birthdays and “I’m sorry I snubbed your cat” occasions, is where do these flowers come from? Every green grocer in town seemingly carries the same stock of $5 neon daisies, $6 carnations and, come May, $8 tulip bouquets. 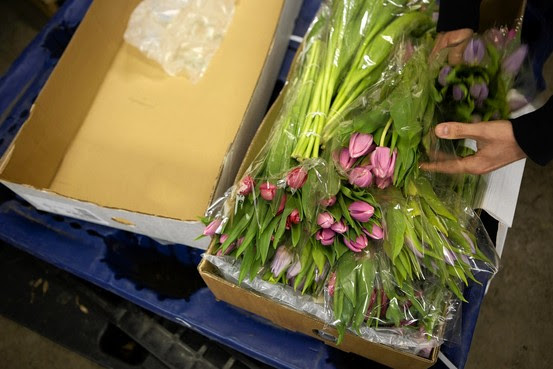 Forget the city’s wholesale flower district—that’s the high end. Grocery stores have their own network of suppliers. Among them is Metropolitan Wholesale, an outfit operating out of a low-slung industrial park in Saddle Brook, N.J. Owner Nick Valenti supplies about 3,000 shops ranging from florists and event planners to nearly 100 bodegas in Manhattan and the Bronx.

The business is surprisingly high tech. Mr. Valenti maintains a slick website that clients use to place orders. Bodegas prefer the cheaper posies, he said on a recent morning, scrolling through the options on his site. He offers several dozen varieties of tulip, for example, including the soft pink “Rosario,” which wholesales for 82 cents a stem. But bodegas favor the “multi-color assortment”—a grab-bag carton of 350 tulips in mystery shades. “They buy cheap and in high quantities,” he said.

Mr. Valenti paid 42 cents a stem for the latest shipment of assorted color tulips from Holland; he sells them to bodegas for 46 cents. It’s a slim margin, but he’ll sell a quarter-million flowers in the week before Mother’s Day.

Most of his buds come through the big flower auction in Holland. But roses are his favorite, and these he buys directly from a dozen small farms in Ecuador. “My job is to know what farms are good at what colors,” he says. He calls the farms via Skype, placing orders in broken Spanish. Hardy flowers like carnations, which can survive a three-day journey, are flown to Miami on cargo planes and trucked up the Interstate for delivery to his warehouse. Delicate varieties requiring speedy delivery are flown directly to JFK and trucked straight to the bodegas under the cover of night.

I was hoping he’d tell me that bodegas carry the same flowers as the florists. Then I could tell myself I’m not a cheapskate, just a clever shopper. Alas, that’s not so. Flowers are sorted and priced by grade, and bodegas seldom carry the prime specimens.

The typical cymbidium orchid stem sold at the green grocer, for instance, carries six blooms and wholesales for $7. The high-end version, meanwhile, might carry 18 flowers and wholesale for $22. The classic bodega carnation, known as a “short,” has a two-inch bloom and a thin, 30-centimeter stem, while the “select” grade offers a three-inch head and a 50-centimeter stalk. And while the green grocer offers loads of white and blue hydrangeas from Colombia—those cloudlike flowers that look like sheep on a stem—only the florist offers the beautifully fringed, pink blush varieties grown in Holland.

Bodegas, however, do have the market cornered on those orange and blue neon daisies. The screaming blooms are dyed by Ecuadorian farm hands who soak the stems in colored water. “It looks atrocious to me,” says Mr. Valenti, “but people like them.”

So can you fool mom with a cheap bouquet? Yes, if you’re lucky enough to shop with a florist who teaches a workshop in bodega flower arranging. Last week, I hit the streets with Beth Was Horta, a freelance florist who jets around the world creating arrangements for big events. She teaches at FlowerSchool New York, a floral arts school on West 14th Street catering to both professionals and flower-crazed enthusiasts.

She’s wary of bodega flowers. Grocery owners have no place to chill their posies overnight, shortening their lifespan. And to avoid waste, some sell flowers past their prime. If flowers were monsters, bodega posies would be the walking dead.

Ms. Was Horta and I started at a Korean snack shop in the Village fronted by the usual buckets jammed with carnations and bright orange gerberas. She pointed out a sorry-looking bouquet of roses. The buds were oddly pointy. “They’ve peeled off the petals that have started to wilt,” she says. The remaining petals are veined—another sign of age. “And feel this!” she says, squeezing the base of a bud. It was soft and spongy, a symptom of dehydration.

Ms. Was Horta dismissed the store’s mixed arrangements—those riotous combos of red roses, sunflowers and baby’s breath found only at the bodega. Not only do they look like the work of a crazy person, they’re often composed of flowers past their prime.

But looking further, she found plenty of floral fodder for an elegant Mother’s Day arrangement. Her strategy: combining four or five flower varieties in the same color family. “Keep it mono and you’re taking out the guesswork,” she says.

She starts with the $10 lilacs and $8 purple tulips. Flowers in season are usually the best deal at the stand. Next, she selects a bouquet of spray carnations. “Carnations can be a good foundation or serve as filler,” she says. She adds two $6 bunches of striped alstroemeria—a delicate looking lily that’s surprisingly hardy. Finally, she grabs a bunch of deep green ruscus leaves; foliage adds polish.

Back at the flower school, she gives every stem a fresh cut, hammering the woody stems of the lilacs to split them open. She snips off stray branches and leaves that would rot under the water line.

It takes about 45 minutes to dissemble, trim and arrange all nine bouquets in a $2 glass vase. But the result looks like something you’d see in the lobby of the Plaza Hotel. This would really wow mom.

Back home, the lovely tulips and lilacs last about two days. But what did I expect? The cheap carnations, of course, will never, ever die.

Perfect for regifting on Father’s Day!