Posted on May 16, 2015 by Metropolitan Wholesale 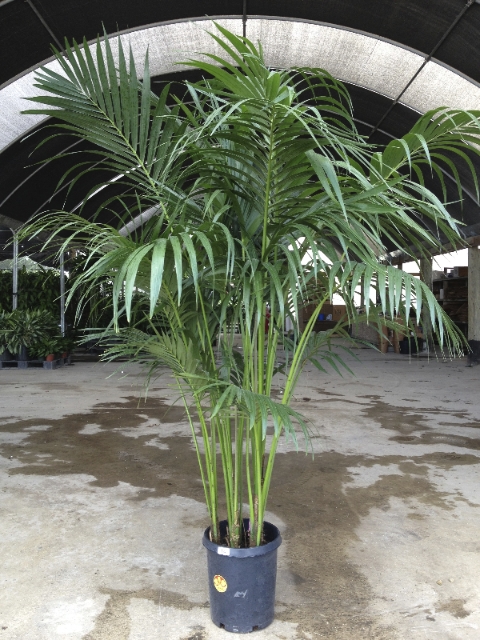 Palms are plants that people generally place in their offices, homes or gardens when they want to go for the ‘tropical’ look. Palms offer very attractive focus points in any garden or indoor space with their long and slender leaves, or fronds.
While many palms prove difficult to be grown in the home, the Kentia Palm (Howea Forsteriana) is among the favorite species for homeowners. The reason for that is its ability to grow easily even with a good amount of neglect. It is a plant that is suited well to be grown in a container, unlike some other palms.
The Kentia palm is native to an island near Australia, by the name of Lord Howe Island. Here, this beautiful plant with a thin trunk and feather-shaped fronds can grow up to an amazing height of 60 feet. However, the ones grown indoors usually have a height of 5-12 feet.
Being an easy to grow plant, the Kentia palm doesn’t have a lot of requirements that need to be fulfilled. However, just like with any other houseplant, there are some things you need to be aware of to ensure healthy growth.
The Kentia palm is a species that can handle various soil conditions, which is one of the reasons it is such a popular choice for people. That said, the plant does best in a well-drained soil. Be sure to keep the soil slightly moist at all times. If the soil doesn’t have good drainage, it can cause root rot to your palm.
In case you are planning to grow the plant indoors or in a container, you should use a suitable potting medium with fast drainage. Using a medium that is on the sandy side will let your Kentia palm grow well.
Kentia palms don’t require a lot of direct sunlight. When planting outside in the ground, be sure to place it somewhere with indirect but bright light. Direct and sharp sunlight can cause sunburn to young plants’ leaves.
If any spotting occurs on the leaves, it is an indication that the plant is getting too much direct light and you should move the plant away into filtered light.

Kentia Palm
Kentia palms only need to be watered when the soil’s top layer is dry. Over-watering causes the plant’s roots to rot. Watering the plant too little causes the leaves to turn yellow, and then brown. A way to spot the plant’s watering requirements is by noticing its leaves and stalks. If you notice them drooping down instead of standing up firmly, it means you need to water the plant a little more frequently.
As a rule of thumbs, you should water your Kentia weekly during the summer. Just be careful not to let the plant sit in water.
Kentia palms prefer warmer temperatures to grow well. In winters, they can survive temperatures of around 55 degrees Fahrenheit. Try keeping the plants in a warm environment, like in front of a window with filtered light or in a shady part of your garden if outdoors.

The Kentia palm is slow growing plant and doesn’t need a lot of nutrition to grow. During the summer, however, you should feed the plant with a slow release or a liquid fertilizer on a weekly basis. The most preferred fertilizer is one composed especially for palms. During autumn and spring, feeding the plant once a month is enough.
Avoid repotting the plant generally, as the Kentia palms don’t like to be disturbed. If you have to repot, do so only when the plant is fully root bound. This should be the case after every two to three years. The reason for waiting this long is that the plant, at this stage, is growing very slowly and the chance of the plant dying from shock is minimal.
Always remember not to disturb the plant’s roots a lot while repotting.

Seeing the number of leaves growing out of the trunk, you might feel tempted to prune the Kentia palm very often. Avoid this urge unless pruning is absolutely necessary. Over-pruning can lead the trunk being permanently damaged. It may also encourage fungal attacks on your plant.

This palm can be affected by the usual pests like mealybugs and mites. The way to avoid such attacks is by misting the plant regularly. Misting also provides a better humidity to the plant which helps with its growth.
The sign of a healthy Kentia is the dark green color of its fronds. These can turn brown and ultimately die in case of over-fertilization. Another reason for the yellowing of leaves is a lack of air or water. Misting with water helps avoid such a situation while also taking care of dust buildup on the leaves.
As mentioned before, over-pruning the plant may cause the trunk to decay. Keep noticing the truck for any splitting, as this may be the cause of pruning too much. A trunk that is decaying or splitting is an indication for a dying palm.

The Kentia palm is a forgiving plant, which will grow well in a variety of situations. Just be sure to give the plant enough room to grow as it loves to grow a full canopy of fronds and a number of stems. If you keep a few things, as mentioned here, in mind, you can be sure to have a beautiful and striking plant adding to the elegance of your home or to the natural essence of your garden.