Posted on December 11, 2013 by Metropolitan Wholesale 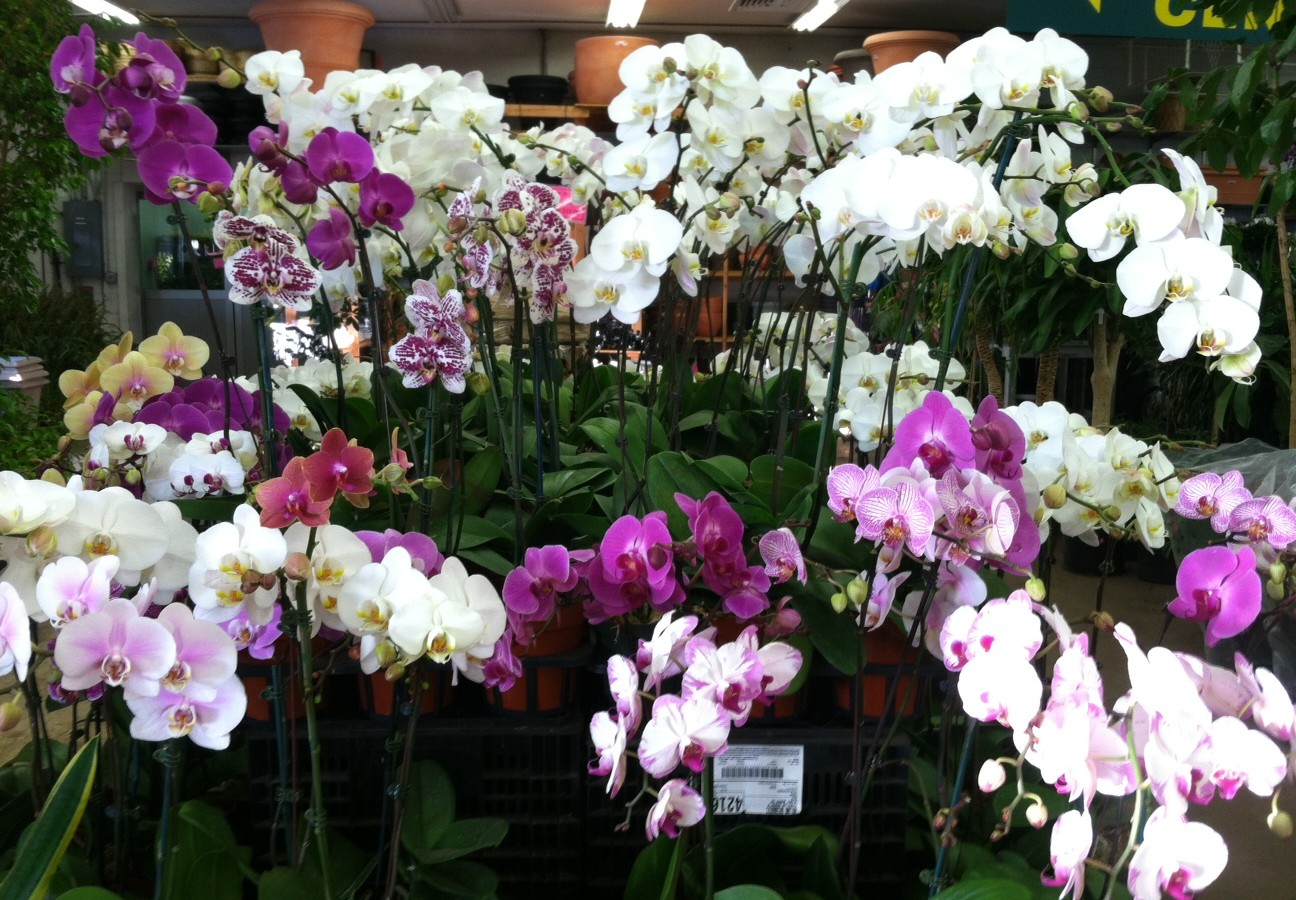 Many people ask us for the proper care of the Phalaenopsis Orchid. By following these instructions, you should have no problem keeping your orchid thriving and blooming for years to come. The Phalaenopsis Orchid is by far the most popular orchid for growing in the house due to their long bloom life and ease of growth. The common name of the Phalaenopsis is the Moth Orchid, and when you see the appearance of the flower you will know why. Phalaenopsis Orchids are grown in a vast array of colors. Pure white with a touch of yellow in the lip is the most common, but we have seen them in all shades of purple, lavender, peach, burgundy, black and yellows. There are even spotted and striped varieties. We keep dozens of Phalaenopsis in stock, so please contact us to find out which colors are currently available.

Phalaenopsis do best in well-lit locations such as a window sill that has an Eastern exposure. Bright but indirect sunlight is optimal. Be careful not to put your orchid in full sun because in many cases the plant will burn and the leaves will be damaged in a similar way that people get sunburn. If you live in a warmer climate, or during the late spring and summer in the North East, many people move their orchids outdoors for some fresh air. Orchids do well outdoors but make sure that the plant is placed in the shade. If you do not have enough light, the orchid will not be able to grow to its full potential and it may not even survive. It is Ok to enjoy a Phalaenopsis in a lower light location temporarily while it is in bloom (such as a windowless office or dining room) but be sure to place the plant back in its bright light location as soon as possible.  A Phalaenopsis that is getting too much sun is going to develop a light green or yellow appearance to the leaves. On the other side, an orchid that is not getting enough light will develop a dark green color to the foliage.

The Phalaenopsis Orchid is one of the best home grown orchids because it prefers the same temperatures that many homes are kept at on a daily basis. Night time temperatures in the lower 60’s and day time temperatures in the 70’s are ideal. Keep in mind that although your home or office are kept at these average temperatures, other factors may play a part in your orchid being too hot or cold. Make sure that your orchid is not directly affected by a heating or air conditioner vent. The direct cold or hot air will surely damage your orchid. You also want to keep an eye on the window if you place your orchid in one. On very cold days, the glass will transfer the cold – and if the leaves from your orchid are pressed against the glass, they will become damaged. It is never a good idea to have your orchid up against any window or wall. You will also want to avoid any drafts in colder climates. A cold gust of wind from being placed near a door or window that opens could also damage your orchid.

The most important thing to keep in mind when watering a Phalaenopsis is that in nature, these orchids grow on trees in a tropical region. The roots collect humidity from the air and not from soil. In our homes or offices, we keep the orchids in sphagnum moss or bark chips to simulate their natural environment. Phalaenopsis prefer to be kept moist but not wet to the point where they can become susceptible to root rot. There is not specific amount or frequency of water that we can suggest because the lighting, temperature and evaporation rates differ in every home. You will need to develop a feel for the proper amount of water. Try to keep an even amount of moisture, not letting your orchid stay soaking wet and not allowing it to completely dry out. Do not let water accumulate in the crown or cups that the leaves create. Moderation is key. Also keeping your Phalaenopsis in a clay pot or a pot with several drainage holes will allow good air flow and less water retention. Some people choose to grow their orchids in wooden crates. Any planter that allows for evaporation, air flow and water drainage works well. Once you develop the “feel” for watering, you will be able to judge when to water by picking up the plant. The heavier the plant feels, the more moisture there is in the growing medium. Humidity also plays a major role in the health of Phalaenopsis. Again, remember that in nature, these plants get their moisture from the humidity in the air. We highly recommend that you grow your orchid on a humidity tray. If you do not have a humidity tray, they are easy enough to improvise. A simple baking sheet with a layer of gravel or stone will do the trick. Keep the tray filled with water below the height of the stones. Place your potted orchid on top of the stones so they are not touching the water. As the water in the tray evaporates, the Phalaenopsis will reap the humidity benefits of the evaporating water. Recently there is a trend of marketing Phalaenopsis as a plant that can be watered with ice cubes. We do not suggest using this as a surefire way to care for your plant. In our opinion, this is a quick fix way to care for your plant and generally will not be the appropriate amount of water. No amount of ice cubes can substitute a good education on Phalaenopsis Orchid care.

A common question that we are asked is what to do with the flower spike after the blooms have lived out their cycle. You have a couple of options of what to do. If the stem is drying up, shriveling and turning yellow, simply cut the stem off at the lowest part closest to the base of the leaves. If the stem is still strong and green but no longer has any flowers, you can leave the stem alone. In many cases the stem will branch out again from one of the segments along the spike. You could get a whole new set of flowers from the new branch. Sometimes the stem will begin to grow a “pup” plant. This pup plant is one of the ways that Phalaenopsis reproduce. The pup will grow leaves and eventually roots will cascade from the stem. At this point it is safe to remove the pup from the mother plant and give it its own pot. Some people choose to cut the healthy stem before it dries out, re-blooms or creates a pup – in order to allow the orchid to focus its energy on producing new roots, leaves or even a new flower spike.

Repotting your Phalaenopsis is one of the most important things that you need to do to insure a healthy plant. Orchids are usually planted in sphagnum moss, fir bark or an orchid blend potting mix.  These mediums tend to break down rather quickly, so repotting should be done roughly once per year. You will want to start by choosing a new planter for your orchid. The pot or planter should be slightly larger, roughly one inch in diameter. The new pot should also be made of a material that is porous or breathes, such as terracotta. A good option are pots that have holes placed randomly around the pot to allow air circulation. You will want to carefully remove the orchid from its old container and shake out any old planting medium or moss. Take a close look at the roots. With a sharp knife or scissors, remove any roots that appear dead, rotted or shriveled up. You don’t want any old or dead roots festering at the base of your new planting. Place a layer of the new orchid medium at the base of the new planter. Sphagnum moss and fir bark are good choices.  We prefer an “orchid mix” which generally contains pine bark, fir bark, sphagnum moss and charcoal.  Finally, center the orchid in the new pot and carefully pack your planting medium around the sides and top of the orchid. Timing is also important when repotting a Phalaenopsis. The ideal time to repot is after the blooms and spike have died off. Usually short after, the orchid will go into a growth phase when it begins to grow a new leaf from the center of the plant. We never suggest repotting an orchid when it is in bloom. The plant can go into shock and the blooms and buds can die.

Getting Phalaenopsis To Bloom Again

Re-blooming your Phalaenopsis can be one of the more challenging parts of growing them. Even with ideal conditions and care sometimes orchids can be stubborn about producing more flowers. We find that keeping a cooler average temperature – around mid 60’s, can push the orchid to produce a new flower spike. Generally orchids produce a flower spike after the cycle where it produces new roots and leaves. There are also a few products out that you add to your watering cycle to help the orchid flower. These bloom promoting products encourage plants to produce flower spikes by giving them the fertilizer they need to do so. From our experience, they work well and should definitely be taken into consideration if you are having trouble getting your Phalaenopsis back into flower.

Do orchid fertilizers work? Definitely. Orchids, like every other living thing need a source of energy. The orchids take in their nutrients from the water and potting medium they are planted in. That medium only holds so much, and when the nutrients are depleted, fertilizer is the only source left. People who grow orchids without repotting and fertilizing regularly are essentially starving the orchids and holding them back from their full potential. There are many different orchid fertilizers on the market and they come in many forms. There are water soluble fertilizers, ready to use liquid, liquid concentrate, fertilizer spikes, time release granules and many others. They have also recently come out with a “mist” form or orchid fertilizer. Which orchid fertilizer works best? That is up for you to decide. We prefer a ready to use liquid simply for the convenience of use.

Are Buds Falling Off Your Phalaenopsis Orchid?

One of the most common problems that people experience with Phalaenopsis orchids is an issue commonly referred to as “bud blast”. Bud blast is when the orchid produces buds that never turn into flowers. Instead, they turn yellow and drop from the plant before they have a chance to open. Many factors can cause bud blast. Overwatering is the most common but the plant being too dry could be an issue as well. An insect such as spider mite can cause bud blast as well as temperature extremes. Bud blast can also be caused by stress or lack of fertilization. Was the plant recently purchased and shipped in a box? Sometimes simply moving the orchid from one place to another can stress the plant into dropping its buds. The good thing about bud blast is that it is a problem that is easily solved. Read through this explanation of orchid care and make yourself a checklist. One or more of the contributing factors can be narrowed down and you can rid yourself of this issue.